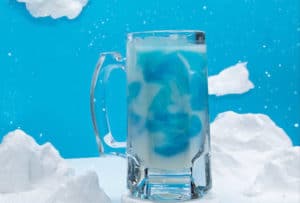 You can get the drink for just $1 every day in January.

The drink of the month will give people “a taste of tropical getaway.”

“It’s a tropical rum drink at heart, but we added vodka for good measure,” Patrick Kirk, Applebee’s vice president of beverage innovation, said in a statement. “In the peak of chilly weather, it’s the perfect warm up when you’re ready to tell winter to frost itself.”

Served in a 10-ounce mug, the Frostbite is a “boozy, tropical cocktail with a blend of rum, vodka, blue curacao, creamy coconut and pineapple” and has blue and white swirls, served on the rocks.

Escape winter with flavors from the tropics made with rum, vodka, blue curacao, creamy coconut and pineapple – we call it the Frostbite, only $1 this January.