Burger King discontinues their popular 2 For $5 Mix and Match value offer and replaces it with a new BOGO + $1 offer at participating locations.

Everyone loves to save money when dining out or going for fast food and Burger King has come thru again.

Fans of the 2 For $5 Mix and Match will recall the value menu included any two of the following select entrees for 5 bucks: 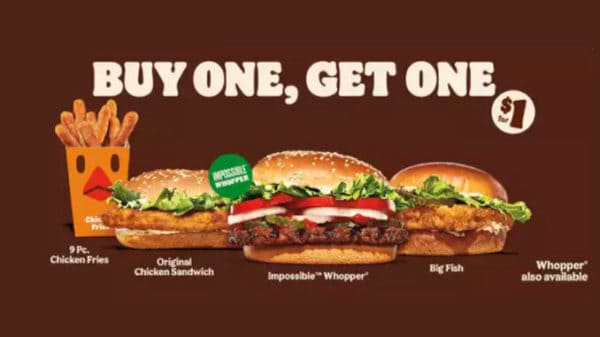 While the new BOGO + $1 promotion adds the Impossible Whopper to the value menu, the 2 For $5 Mix and Match deal offered more bang for the buck.

As part of the brand’s value menu restructuring, Burger King also adds the Impossible Whopper to the 2 for $10 Meal Deal, which includes any two entrees from the value menu, served with two small fries and two small drinks for 10 bucks.

Stop by your favorite Burger King downriver and grab this new BOGO for $1 Deal while you can.

Source: The news about Burger King’s new Buy One, Get One For $1 Deal appeared first on Chew Boom.

Domino’s Debuts New Chicken Taco Pizza And New Cheeseburger Pizza
Domino’s adds new pizza flavors to their lineup wi...
Olive Garden Launches Amazing Alfredos Promotion
Olive Garden launches Amazing Alfredos, a new limi...
Peppermint Hot Cocoa Blizzard Returns To Dairy Queen For The Holiday Season
Dairy Queen is celebrating the 2020 holiday season...
Free Dessert At White Castle With Proof Of COVID-19 Vaccination
White Castle is offering free desserts to anyone w...
All You Can Eat Menu Items Back at Applebee's
Applebee's All You Can Eat trio is back and just i...
How Popular Was Popeyes’ Chicken Sandwich? We'll Tell You...
Popeyes’ chicken sandwich was a huge success and w...
Outback Brings Back Kingsland Pasta And Spinach Dip
Outback Steakhouse welcomes back a pair of fan-fav...
Del Taco Has Opened in Allen Park
Downriver continues to flourish with n...
Previous
Next