McDonald’s celebrates the 50th anniversary of its popular Shamrock Shake by adding it to menus nationwide. 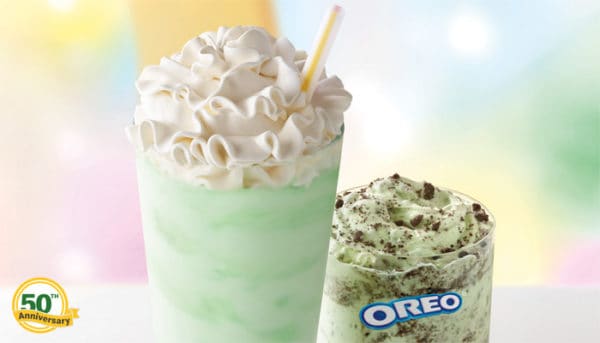 McDonald’s is celebrating 50 years of the iconic Shamrock Shake which will be available in all participating locations on February 19 for a limited time, along with the new OREO Shamrock McFlurry.

To celebrate, McDonald’s is taking the Shamrock Shake nationwide for the first time since 2017 and introducing the new OREO® Shamrock McFlurry® for a limited time. This year, customers have two different ways to enjoy the craveable Shamrock taste they know and love — how lucky is that?

The Shamrock Shake features creamy, vanilla soft serve blended with our unmistakable Shamrock flavor and topped with a whipped topping for a delicious minty treat.

The new OREO Shamrock McFlurry is a twist on a fan-favorite, featuring creamy, vanilla soft serve with our unmistakable Shamrock flavor and OREO cookie pieces blended throughout for a delicious minty-chocolaty dessert that super fans and new fans alike can enjoy.

The Shamrock Shake was created by Hal Rosen, a Connecticut McDonald’s owner and operator who made the mint shake for St. Patrick’s Day. It soon caught on around the country.

“Every year customers eagerly await the return of the Shamrock Shake — and over the past five decades, getting a sip of this green legend has become a seasonal tradition for many,” said McDonald’s Archivist Mike Bullington. “The shake’s unique history and wide spread passion for this menu item has qualified the Shamrock Shake as a beloved cultural icon. We feel lucky to have such dedicated Shamrock fanatics, and hope to continue the legacy of this legendary treat for many more years to come.”

The anniversary fun doesn’t stop here. Shamrock lovers are in luck, as McDonalds will be revealing even more ways to get in on the golden celebration of the Shamrock Shake throughout the season.

Get Blaze Fast-Fire’d Pizza Upgrades For The Super Bowl
Guests can choose from a variety of Game Day c...
Firehouse Subs Puts Together New Family Meal Deal
Firehouse Subs offers enough food to feed a group ...
Wendy’s To Release New Jalapeño Popper Chicken Sandwich
Look out Popeyes, it appears that Wendy’s is looki...
Everyone is Talking About KFC's New Chicken Sandwich
Can KFC's new Chicken Sandwich compete with the ot...
Get a Free Doughnut From Dunkin’ Every Friday in March
Would a free donut on Friday make your day a bit b...
All American Buffet Celebrating All Week Long
The restaurant has recently changed new ownership ...
Red Robin has new items for serious bacon lovers
Red Robin is embracing bacon love with its latest ...
Dairy Queen Brings Back Chicken And Biscuits Basket
The Chicken & Biscuits Basket is back on the m...
Previous
Next