Your ultimate resource for Restaurants that DO NOT allow guns.

The Second Amendment is a fundamental right of every American.

However, there are still many places that won’t allow you to open carry inside their building.

Certain businesses in Michigan have either posted no-guns signs or have indicated in their ‘business policy’ that persons lawfully licensed to carry concealed firearms for self defense are not welcome on their property or within their place of business. 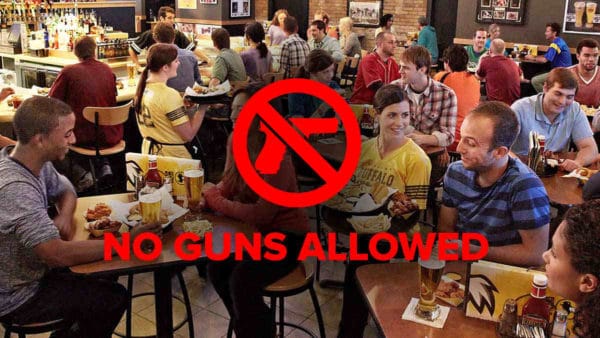 While the policy doesn’t mean to deny Michigan’s upstanding citizens the right to protect themselves against a criminal attack while shopping or eating, it does seem that only law-abiding citizens will obey their no guns allowed signs.

The display of a “No-Guns” sign can give criminals a lot less to worry about and may even embolden a bad person to commit armed robbery or an act of violence in these so-called “gun free environments”.

Although most businesses in Michigan have chosen not to post discriminatory signs against concealed pistol holders, some have. Even though these businesses have the right to post no firearms allowed signs, it does NOT mean that they are “gun free environments” as criminals intent on robbery, or worse, will continue to be armed.

Although we have found quite a few restaurants within the downriver area that do not allow guns, this list is not all inclusive. 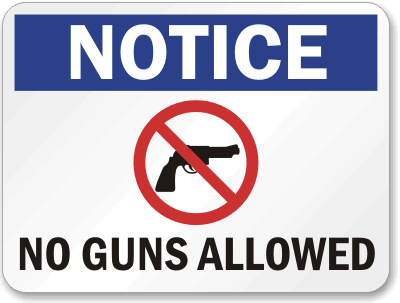 Here is our current list of NO GUNS ALLOWED restaurants:

Every time we experience another major act of gun violence, it seems the list of anti-gun restaurants grows bigger, so it’s better to err on the side of caution when you eat out and choose not to bring a pistol.

Whether you are Pro or Anti-Gun, restaurant owners can also dictate if you can bring a weapon into their establishment.

Some places have even seen some pretty nasty backlashes to their gun policy.

Although a few years old, you can read about how this pizza place had to fight back on social media after negative reviews mounted in a fury:

Pi Pizza, the recently opened brick-and-mortar home of the popular food truck that’s a collaboration between chef-partner Anthony Calleo and Cherry Pie Hospitality (State Fare, Lee’s Chicken and Donuts), found itself on the receiving end of a modern phenomenon this weekend when guns rights activists bombarded its Facebook, Yelp, and Google pages with one-star reviews over the restaurant’s decision to ban concealed carry from its premises.

If you carry and plan to visit a restaurant, it’s always best to keep your gun locked in your vehicle unless you know for sure the establishment will allow you to carry it inside.

Along with the right to bear arms, you ultimately have the freedom to pick and choose where you decide to eat or shop and now with our list of anti-gun restaurants downriver, you are more prepared when you eat out.

Refer to the additional cited sources below for more info on the open carry policy for restaurants.

There’s also a Pro & Anti Gun Carry Locations app you can buy for your phone so you’ll always have a list handy.

Resources:
Places to avoid while armed
The Boycott List
Businesses That Prohibit Guns

Here’s my take on the subject. Unless it’s a criminal offense to carry my concealed gun into a business I’m going to matter what their signs say! If the owners find out somehow I’m carrying and ask me to leave I will do so only to keep from being arrested for trespassing. After that I not only will never return to your business but I will also let every gun I know about your anti 2nd Amendment beliefs!

I disagree with the suggestion to leave pistols in the car unless you know they are allowed, here’s why:

Unless I know otherwise I will just assume they are allowed.

Anti gun signs have no force of law in Michigan, unless they actually ask me to leave it is perfectly legal to carry in a restaurant even if they have antigun sign posted.

My life and the lives of my loved ones (and other innocents) are more important than their feelings. Their sign won’t protect me, my pistol will. Also I will take special delight in carrying there just to rub their communist faces in it. I.E. I just ignore those signs if I have to go in.

That said, I do not do business with the enemy, and that is what they are, my enemy. I will boycott any business with an antigun sign or policy, even stores and restaurants I have gone to for years and would be very inconvenienced to not be able to go there, I will not give the communists a single penny and want them to go out of business. I will not do business with Walmart, Kroger, Meijer, or Starbucks, all based on their antigun policies and donations. That severely limits where I can shop but that is how important this is, I have not done business with starbucks for the better part of a decade I’d guess, and the others for about a year. Add to that Leatherman Tools, Rock River Arms, Springfield Armory, Beretta, and Chiappa, yes even gun companies can be antigun. (Springfield Armory and Rock River arms donated money to antigun politicians and tacitly supported gun bans in an exchange for a carve out for themselves and then attempted to cover it up, which makes them not only traitors but corrupt and liars, Beretta and Chiappa each supported gun bans in Italy, and Leatherman participated in unconstitutional gun destruction with a police agency.)

Other companies I boycott for other political reasons
Target: Gave money to a terrorist organization (blm), lets men in to the women’s bathroom just because the pervert claims to be mentally ill (gender dysphoria), and eliminated the separation of boys and girls toys this making it more tricky to shop just so they don’t offend the trannies and sjws.
McDonalds: Donated $500,000 to terrorists
Wendys: Donated $500,000 to terrorists
Subway: Also donated to terrorists ($500,000?)
BP: Donated $250,000 to john kerry campaign in 2004, yep, I have not gone to a BP in 17 years, despite multiples being on my way and even cheaper than others.
P&G and any company or brand owned by P&G including Kraft. P&G owns Gillett and failed to fire the entire board of Gillett or even condemn the “toxic masculinity” ad.
Heinz: Owned by john kerry’s wife

Companies I used to boycott:
Colt: Formally anti civilian government boot lickers that supported gun bans but has now been bought out by CZ, which is a progun company.
Ruger: Used to be antigun and supported the AWB when run by Bill Ruger, but bill ruger died and the new owner’s and management had nothing to do with it.
Smith and Wesson: They used to be antigun until they were bought out, the current company is fine.

I think anyone who is so hell bent on anti guns and won’t allow legal concealed carry permit patrons in should also not allow any servicemen or cops in as well due to the fact that their jobs require them to carry guns too! Honest law abiding citizens who carry guns should be absolutely outraged at the assumption that we are somehow responsible for all the gun violence and should be treated like criminals! Let me remind all these people that Good Guys With Guns Usually are the link to survival against Bad Guys With Guns! What are they going to do if (or should I say when) the bad guy comes in to rob them, shake their fist and make a really mean face and hope it works, I WILL NOT PATRONIZE ANY BUSINESS THAT PUTS ME OR MINE IN DANGER BY TELLING CRIMINALS NO ONE IN HERE WILL ENGAGE YOU WITH ARMED RESISTANCE!