Taco Bell is bringing back the $1 Loaded Nacho Taco for a limited time on December 24, 2020.

Santa must have read our wishlist…

The older you get, the less interesting your Christmas list becomes. But here’s the good news, you’re getting at least one thing you would’ve loved at any age: the return of Taco Bell’s Loaded Nacho Taco. 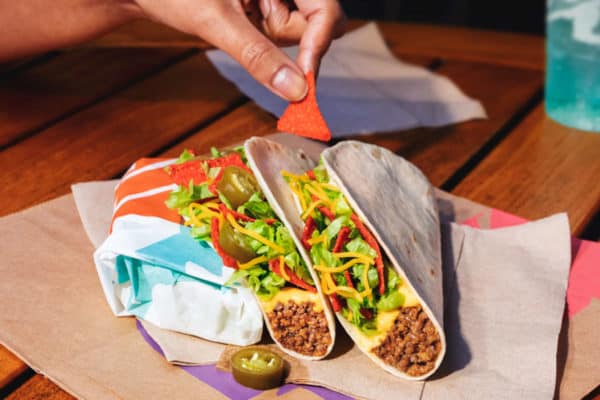 Following a year of tragic menu cuts at Taco Bell (may the Mexican Pizza RIP), the Chalupa slinger is bringing back an old fave in time for the holiday season.

These cheesy meat boats are part of the chain’s value menu and will only run you $1, which basically just means you have enough cash for a larger order.

“For years, Taco Bell has been a part of our fans’ milestone moments—from proposals and weddings to graduations and proms—and we’re excited to introduce a fun and convenient service to help celebrate any occasion in between,” chief global brand officer Nikki Lawson said in a statement. “As we continue to innovate and identify new ways to deliver engaging brand experiences with consumers, our focus on our digital infrastructure has allowed us to surprise and delight fans with unexpected offerings. We’re excited to keep exceeding expectations.”

ICYMI, the Loaded Nacho Taco made its official debut back in April 2019. Each comes wrapped in a flour tortilla filled with, well, nachos. It’s got seasoned beef, nacho cheese, lettuce, Cheddar cheese, and mini southwest-seasoned chips.

Find your favorite Taco Bell downriver and get your Loaded Nacho Tacos today.

Source: The news about The $1 Loaded Nacho Taco Returning to Taco Bell appeared first on Thrillist.

HOT Marketing Strategies Restaurants Can Implement Right Now During the COVID-19 Outbreak
During these challenging times for restaurants, ma...
New Decade, New Twist on Applebee’s Famous All You Can Eat Promotion
The fan-favorite deal gets an upgrade with Bon...
Taco Bell Brings Back The Double Cheesy Gordita Crunch
The Double Cheesy Gordita Crunch is back on the me...
Wahlburgers In Taylor to Close. Opening Soon in Woodhaven
Marky Mark and his funky hamburgers are making a...
Think Twice Before You Order a Salad at McDonald's. Here's Why
Does anyone really go to McDonald's in search of h...
Sonic Adds New Reese’s Overload Blast And Waffle Cone To Menu
Sonic Drive-In just dropped two new frozen treats:...
Is Jersey Mike's Healthier Than Subway?
Who has the healthier sub sandwich? When it comes...
Arby’s Debuts New Beer Battered Fish Sandwich
Arby’s offers a new take on the classic fish sandw...
Previous
Next